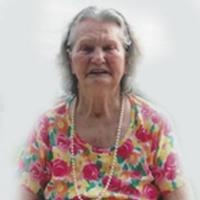 This is a celebration of life for Zillah Magdalene Neal Reed who was born August 3, 1922. She departed this worldly life at the age of 92 on Saturday, April 4, 2015, at the home of her son Kenny Reed. She was surrounded by family who loved her.

During her lifetime she witnessed several wars, the great depression, terrorist attacks on U.S. soil, minimum wage at the high rate of 25 cents per hour, assassination of 2 well famous influential people, and space shuttle missions. These are a few of the many things that made Zillah a strong woman.

Zillah was a member of the Reorganized Church of Jesus Christ of Latter Day Saints. Zillah will be sadly missed by her family and friends; but there is rejoice in knowing she is in her eternal home.

Funeral services will be held at 10:30 a.m. Tuesday, April 7, 2015 at Sassmann's Chapel in Belle with Pastor Patti Smith officiating.

To order memorial trees or send flowers to the family in memory of Zillah M. Reed, please visit our flower store.