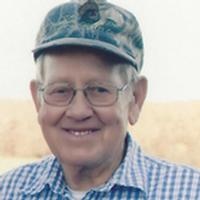 Winfred "Wink" Elrod, age 80, of Belle, passed away Tuesday, May 3, 2016 at the University of Columbia Hospital.

Wink was born January 1, 1936, in Vienna, a son to the late Allen Boney and Zillah (Backues) Elrod.

He was a 1954 graduate of Belle High School. Following graduation, Wink served his country in the United States Army as an heavy equipment operator.

On December 27, 1958, he was united in marriage to Venita Litton in Belle. She survives of their home near Belle.

Wink was a member of the Local #513 Labor Union out of St. Louis and was a heavy equipment operator, retiring after 27 years. He was a cattle farmer as well, running his family farm outside of Belle.

He was a member of the Union Hill Baptist Church near Vienna.

Wink enjoyed working on any old vehicle and restoring cars. He was a excellent mechanic and could fix anything. Wink was very social and liked to go to J.J's for breakfast with the boys. He was a staunch Democrat and not afraid to speak his mind. Wink was a animal lover and always had a dog beside him. He loved being at the farm, whether it was feeding the fish or just spending time with his family. His greatest joy was spending time with his grandkids and great-grandkids.

Wink was preceded in death by one brother, Leonard Elrod and one brother-in-law, John Murdock

Funeral Services will be at 10:00 a.m. on Saturday, May 7, 2016 at Union Hill Church, near Vienna, with Pastor Floyd Leimkiller officiating. Interment will be in the Union Hill Cemetery with full Military Honors.

Expressions of sympathy may be made to the Union Hill Cemetery fund. .

To order memorial trees or send flowers to the family in memory of Winfred "Wink" A. Elrod, please visit our flower store.