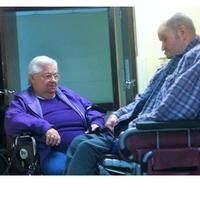 She was a 1953 graduate of Bland High School and lived in St. Louis for a time after her graduation. She returned to the Belle area following her marriage to Sonny.

On February 24, 1962 Wilma was united in marriage to Arvel "Sonny" Thompson at the Evangelical Reform Church in Bland. From this union, two sons were born. He preceded her in death on October 8, 2013.

She had been employed at both the Brown Shoe Company and the Kelwood Company in Bland before retiring.

Wilma was a member of the Zion Evangelical Free Church in Bland and enjoyed reading and doing puzzle book as well as listening to gospel music. She especially like the music of George Beverly Shea.

Wilma is survived by: two sons, Mike Thompson and his wife Ginger of Belle and Bryan Thompson of Belle and his fiancAC. Cheri Power of Jefferson City; grandchildren, Jackie Morgan and her husband Jeremy, Alex Ruesler and Katelynn Zook; one great-grandson, Hunter Lee Inman; one brother, Ronnie Enke of Boerne, TX; one sister, Fern McKinney of Tuscumbia, MO and many extended family members and friends.

In addition to her husband and parents, Wilma was preceded in death by: six brothers, Edward, Edwin, Neil, Carl, Eugene, and Kenneth Enke and one sister, Doris Enke.

Expressions of sympathy may be made to the Zion Evangelical Free Church.

To order memorial trees or send flowers to the family in memory of Wilma F. Thompson, please visit our flower store.