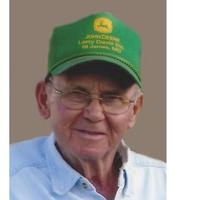 Harold graduated from Rolla High School May, 1941. He began working as an installer for Western Electric Company until enlisting in the Navy Seabees 81st Construction Battalion February 12, 1943. He served for three years participating in both the European and Pacific theaters of World War II, from Utah Beach at the Normandy D-Day Invasion (June 6, 1944) to the invasion of Okinawa (April 1, 1945). Harold was discharged from the military, December 18, 1945.

Harold was united in marriage to Helen Hope Newberry, of Springfield, Missouri, on October 16, 1948.

After his military service, Harold resumed his career with Western Electric. Forty-three years and three months later, he retired with a perfect attendance record, with the then AT&T Technologies Company, as an area supervisor, November 16, 1984.

Retirement provided Harold with the means and opportunity to pursue his passion to raise registered Angus cattle on the family farm. In 2008 the farm was designated a Missouri Century Farm.

Harold is survived by; one daughter, Jackie Schierhorn and husband, Jim, of Orlando, Florida; two grandchildren, Laura Jane Schierhorn of Long Beach, California, and Michael Schierhorn and family of Chicago, Illinois, with great-grand daughter, Luna Scheirhorn; one brother, Wendell R Shockley of Bland, Missouri; two sisters, Verlee Henry of Kansas City, Missouri, and Janice Gallagher of Belle, Missouri; several nieces and nephews including Jay and Katy Gallagher and daughter, Anna, of Belle, Missouri. as well as many other extended family members and friends.

Visitation will be held at Sassmann's Chapel in Bland from 4:00 p.m. to 8:00 p.m. on Friday, July 22, 2016, with a Masonic Ceremony at 7:00 p.m. Private family funeral services will be held at 10:00 a.m. on Saturday, July 23, 2016, with Pastor Bruce Elmore officiating. Interment will follow at Countryside Memorial Gardens near Owensville, Missouri.

To order memorial trees or send flowers to the family in memory of Walter Harold Shockley, please visit our flower store.