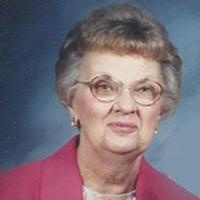 Virginia was born at home, in St Peters, MO, on February 10, 1929, the seventh of nine children born to Arthur and Cecilia (Borgmeyer) Ell.

Virginia attended All Saints Catholic School through the 10th grade and graduated from Francis Howell High School on May 15, 1947.

On October 20, 1948, at All Saints Catholic Church in St. Peters, Virginia was united in marriage to Frederick A. Bethmann, who survives at the home.

Fred and Virginia worked hard together to lovingly raise a family on their farm in St. Peters, before moving to a farm in Belle in 1979.

Virginia was a member of St. Alexander Catholic Church in Belle.

Along with her parents, Virginia was preceded in death by a son, Donald, one brother, five sisters and numerous brothers and sisters-in-law.

Caring for her husband and children was Virginia's joy. Her home became the haven of many over the years, where home cooking, love and laughter were always available.

It was Virginia's wish to be cremated. A Memorial Mass will be held on Saturday, June 27, 2015 at 11:00 a.m. at Sacred Heart Catholic Church in Rich Fountain with the Rev. Augustine Okoli as the celebrant. Private Family Graveside Service will be held at Sacred Heart Parish Cemetery at a later date.

Memorial contributions may be made to St Jude Children's Hospital or Sacred Heart Catholic School in Rich Fountain.

To order memorial trees or send flowers to the family in memory of Virginia L. Bethmann, please visit our flower store.