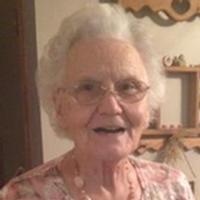 Viola was born on December 25, 1929, in Maries County, a daughter to the late Everett and Susie (Cox) McKinney.

Viola attended the Buck Elk School in rural Osage County. On August 30, 1947, she was united in marriage to Herbert Steve Fredendall. From this union, eight children were born. Herbert preceded her in death on December 10, 1999.

Viola was a lifelong resident of the Belle area and a faithful member of the Liberty Church of Christ. She was employed at various places around Belle including the International and Brown Shoe Factories, the Counter Factory and as a home health aide. She retired from the Osage County Human Development Corporation in Linn.

Viola enjoyed gardening, canning, walking, making quilt tops and she loved roses. Her greatest joy was time spent with her grandchildren and great-grandchildren.

In addition to her parents and her spouse of 52 years, she was preceded in death by: two sons, Roger and Mark Fredendall; four brothers, Carl, Paul, Bernie, and Eugene McKinney, and one sister, Thelma McKinney.

Funeral Services will be at 12:00 p.m. on Monday, December 22, 2014 at the Liberty Church of Christ in Belle with Randy Carr and Larry Harris officiating. Interment will follow at the Bethel Cemetery in Vienna. A luncheon will be served at 11:00 a.m. prior to the service.

Expressions of sympathy may be made to the Fair Haven Children's Home located at 3132 N Fair Haven Loop, Strafford, MO 65757

To order memorial trees or send flowers to the family in memory of Viola M. Fredendall, please visit our flower store.