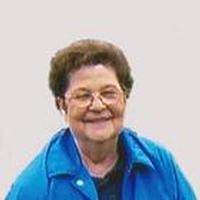 Jean was born September 15, 1935, in Jefferson City, a daughter to the late Roscoe and Helen Marie (Huff) Ridenhour.

Jean attended school in Belle and was a resident of the area for over 50 years. On October 26, 1959 Jean was united in marriage to Gene Adkins at the Pilot Knob Church in Summerfield. Gene preceded her in death on November 22, 2002. .

Jean was employed at the Belle Counter factory for 40 years as the shop steward before retiring. She was a member of the Belle First Baptist Church and was very active in it. Her hobbies included reading, watching Hallmark movies, and taking trips to the Lake of the Ozarks to stay at the Campbell Hotel. Later in life, she enjoyed going dancing and on other adventures with her special friend, Gene Kottwitz who passed away earlier this year. They are now together in Heaven. She will be missed and remembered by all who knew and loved her.

In addition to her parents and husband of 43 years, Jean was preceded in death by two brothers. Robert Ridenhour and Jerry Ridenhour.

Visitation will be held from 9:30 a.m. to 11:30 a.m. on Saturday, October 11, 2014, at the First Baptist Church in Belle. A memorial service will follow at 11:30 a.m. with Bro. Jimmy Bickell officiating. Interment will be at the Liberty Cemetery near Belle.

The family has requested that in lieu of flowers, expressions of sympathy may be made to the First Baptist Church of Belle.

To order memorial trees or send flowers to the family in memory of Velva Jean Adkins, please visit our flower store.