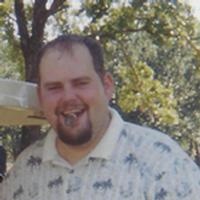 Toby was born on July 2, 1980, at St. Mary's Hospital in Jefferson City, a son to Mike Graham and Marilyn (Gehlert) Fredendall. His father survives of Belle and his mother survives of Bland.

He was a 1998 graduate of Belle High School. Toby had been employed with the Missouri Department of Revenue in Jefferson City for 10 years.

Toby was a loving, caring, family oriented man and loved spending time with his son, Lucas. His hobbies included fishing, mushroom hunting, golf, music, and collecting comic books as well as baseball cards. He enjoyed watching movies and football. Toby was a 49ers fan, like his father. His best times were spent being with family and friends. He will be missed.

In addition to his parents, Toby is survived by: his son, Lucas Cook; two sisters, Kristen Neidert and her husband Bernie, Jr. of St. James and Andi Seymour of Belle; his grandma, Patsy Gehlert; and three nephews, Braxtyn Crider, Isaiah Bailey, and Ethan Bailey as well as many cousins, extended family members and friends.

He was preceded in death by his grandparents, William and Ethel Graham; his grandfather, Alfred Gehlert and many aunts and uncles.

To order memorial trees or send flowers to the family in memory of Toby M. Graham, please visit our flower store.