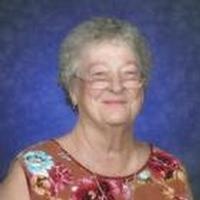 Thelma M. Knott, age 83, of Vichy, passed away Wednesday, April 9, 2014, at the Frene Valley Healthcare Nursing Home in Owensville after a long battle with Alzheimer’s.

Thelma attended school in Grafton, Il through the 8th grade and in 1970 received her G.E.D. She was very proud of that accomplishment. Thelma worked as a dietitian at the St. Elizabeth Medical Center in Granite City, Il for 20 years before retiring.

Thelma was of the Catholic faith. She attended the St. Elizabeth Catholic Church in Granite City, Il before moving to the Vichy area where she was a resident for over 18 years. She was a avid reader. Even as the disease progressed, she was always reading something. She was a huge John Wayne fan. Even keeping a poster of the legend above her bed at the nursing home. Other hobbies include, fishing, watching the Price is Right and Wheel of Fortune, and playing cards, especially poker. Her favorite movie was Gone With The Wind. Her greatest love was spending time with her children, grandchildren, and great-grandchildren. She will be missed and remembered by all who knew and loved her.

Thelma is survived by a daughter, Stacey Martin and her husband David of Vichy; one son, Rodney Knott of Granite City, Il; one brother, Harold Bates of St. Louis; eleven grandchildren, 12 great-grandchildren, as well as many nieces, nephews, cousins and extended family members.

In addition to her mother, Thelma was preceded in death by one son, Andy Lee Knott; one granddaughter, Jessica Marie Holt and one favorite nephew, Ricky Brandon Wallace.

To order memorial trees or send flowers to the family in memory of Thelma May Knott, please visit our flower store.