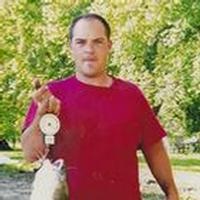 Steven J. Valley, age 33, of Belle, passed away on Wednesday, March 16, 2016, from injuries sustained in an automobile accident.

Steven was born on December 4, 1982, in Rolla, a son to James C. and Aileen Hazel (Skaggs) Valley. They both survive in Belle.

On October 7, 2006, Steven was united in marriage to the love of his life, Jessica Lynette (Bryant) Valley. She survives at their home near Belle.

Steven was employed as a laborer for Local Union #662.

Steven enjoyed deer hunting, fishing, camping and was a master chef when it came to BBQing. Some of his greatest memories was taking his children along with him when he went hunting or fishing. Steve was always there to help people if they needed it. He was a very generous person with a heart of gold. Steven was not afraid to do anything or to help anyone and was always there for his parents. He will be missed by everyone who knew and loved him.

In addition to his parents and spouse of nine years, Steven is survived by: his four children, Dakota Lee Valley, Jessalynn Hazel Dean Valley, Stevie Marie Valley and Dane James Valley, all of the home; two sisters, Shirley Michelle Crider and her husband Kevin of Maywood and Salina Sharp and her husband Andy of Sullivan; paternal grandmother, Geraldine Valley of Vichy; brother-in-law, Michael Bryant of Buckhorn; sister-in-law, Amanda Valley and her husband Nathan of Belle; mother-in-law, Pamela Bryant; father-in-law, Anthony Brandt; several nieces and nephews, one great niece and one great nephew, along with many extended family and friends.

Steven was preceded in death, by an infant daughter, Manda Michelle Valley, paternal grandfather, Lawrence Valley, and maternal grandparents, Charles and Ruby Skaggs along with several aunts and uncles.

Visitation will be held from 10:00 a.m. to 1:00 p.m. on Saturday, March 19, 2016, at Sassmann's Chapel in Belle. Funeral Services will follow at 1:00 p.m. with Brother Bill Perkins officiating. Interment will be in the Liberty Cemetery near Belle.

In lieu of flowers, expressions of sympathy may be made to the family of Steven J. Valley.

To order memorial trees or send flowers to the family in memory of Steven J. Valley, please visit our flower store.