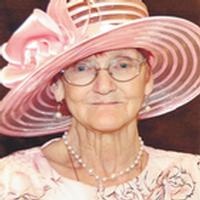 Sherrie was a member of the First Baptist Church of Belle and had been a resident of the Belle area for over 50 years.

Her hobbies included crocheting, working Jigsaw puzzles with her bother Howard, and reading her bible. She loved her independence and enjoyed participating in the Belle Parade. Sherrie was very patriotic and loved her country. Above all, She loved her family and grandchildren, especially her brother and best friend, Howard. The two of them did everything together for their entire lives. Her smile brightened many peoples lives and her love for God was unending. She will be missed greatly by her family and her community.

Sherrie is survived by: one daughter, Sherrie "Missy" Pyatt and her husband Matt along with their children, Jarret and Gavin Magers; one brother, Noel Howard Pyatt of Belle; sisters, Leona Neutgens of Zimmerman MN, Daisy Durbin and her husband Charley of Belle, and Ida Noel Kinney of Willingboro, NJ as well as many extended family members and friends.

In addition to her parents, Sherrie is preceded in death by one sister, Sandra Ruth Pyatt; one great nephew, Noel Jacob Durbin; one brother, Haskell "Buck" Pyatt and one brother-in-law, Kenneth Neutgens.

Funeral Services will be at 10:00 a.m. on Monday, September 19, 2016 at the First Baptist Church in Belle. Interment will follow in the Belle City Cemetery.

Expressions of sympathy may be made to the grandchildren of Sherrie.

To order memorial trees or send flowers to the family in memory of Sherrie Belline Pyatt, please visit our flower store.