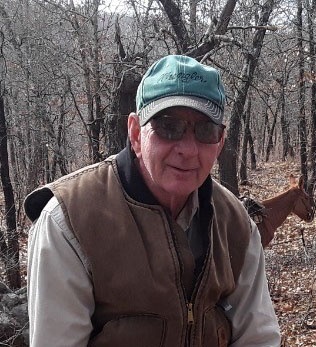 Shelby was a lifelong area resident and 1972 graduate of Belle High school. He was a member of the Vienna Church of Christ where he served as a deacon. Shelby’s faith in God was strong and he was very active in his church.

On September 23, 1972 he was united in marriage to Brenda Cook. Brenda survives of the home.

Shelby retired from MoDot after 30 plus years of service. Following his retirement, Shelby worked for Branson logging for several years.

Shelby enjoyed mule riding, hunting, fishing, mushroom hunting, and basically anything outdoors. He raised and trained Mountain Cur dogs which he loved to do. Shelby loved spending time with his family and will be missed greatly by his family and friends.

In addition to his wife, Shelby is survived by: one son, Andy Martin and his wife Tiffany of Belle; one daughter, Kim Martin of Ft. Collins, Co; one sister, Phyllis Hayes and her husband Danny of Union; and one granddaughter, Josie Martin as well as many extended family members and friends.

Shelby was preceded in death by his aunt and uncle who raised him, Cellus and Sylvia (Grant) Berry and four siblings, Lola Stephens, Donald Robertson, Arnold Robertson, and Terry Martin.

Expressions of sympathy may be made to the Vienna Church of Christ.

To order memorial trees or send flowers to the family in memory of Shelby Lee Martin, please visit our flower store.