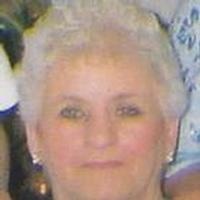 Sharon was born September 1, 1944, in Bedford, Ohio. A daughter to the late Oswald J. Kellar and Doris G. (Mitchell) Kellar.

On June 1, 1963 Sharon was united in marriage to Hamilton Eugene (Gene) Cook at her aunts farm in Belle. He preceded her in death on November 2, 1979.

Sharon worked for Brown Shoe Factory for a number of years as well as Stylemaster and the Belle Counter Factory. She was a member of the Liberty Church of Christ in Belle.

Sharon enjoyed sitting on her porch and drinking coffee, and loved her Chihuahuas Bonnie and Dutches. She also liked to square dance, boat rides on the river, going out to eat, and spending time with her grandchildren. Sharon was always up for any new adventure.

In addition to her parents and husband, Sharon was preceded in death by; one son, Michael Cook; one sister, Denise Walters; and one step-grandchild, Brienna Bolton.

Expressions of sympathy may be the family of Sharon L. Cook.

To order memorial trees or send flowers to the family in memory of Sharon L. Cook, please visit our flower store.