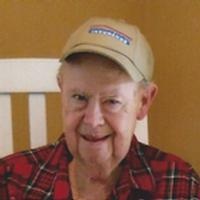 Russell "Tom" Thompson, age 80, of Bland, passed away on Sunday, December 27, 2015 at the Frene Valley Nursing Home in Owensville.

Tom was a lifelong resident of the area and attended school in Belle until the age of 16, when he went to work in order to help support his family.

On February 9, 1957, Tom was united in marriage to his high school sweetheart Vera Jean (Jett) Thompson in Bland. Vera survives at their home in Bland.

Tom was employed at International Shoe Factory in Belle for 28 years and then worked 16 years at the Smith and Davis Company. He was a member of the Belle Christian Church.

Tom enjoyed his cars, whether driving them fast or just taking pride in them. He loved to listen to old time country music whether it was the Grand Ole Opry or the RFD Channel. When Tom was not inside listening to music or watching t.v., he could be found outside working on his hobby farm, gardening, fishing or being at his club house on the Gasconade River. However his greatest joy was the time spent with family and friends. He will be missed greatly by those that knew him.

He was preceded in death by a grandchild, Kelly Thompson; two sisters, Mary Miller and Dorothy Goettling; a brother, Ken Thompson and three brothers-in-law, Louie, Herbert and Delmar Jett.

Funeral Services will be at 10:00 a.m. on Wednesday, December 30, 2015, at Sassmann's Chapel in Belle with Pastor Doug Lang officiating. Interment will be in the Countryside Memorial Gardens Cemetery near Owensville.

To order memorial trees or send flowers to the family in memory of Russell "Tom" Thompson, please visit our flower store.