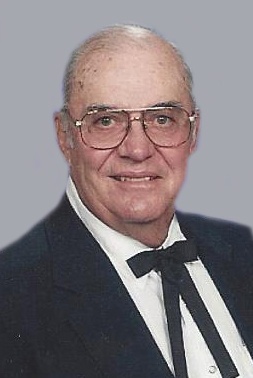 Russell J. Ridenhour, age 86, of Belle passed away on Saturday, February 3, 2018 at the Capital Region Medical Center in Jefferson City.

Russell was born on April 18, 1931, in Osage County, the son of the late William Taft and Lavada (Mee) Ridenhour.

Russell worked at the International Shoe Factory for 20 years before being hired at the Chrysler Automotive Plant in Fenton. He was employed there until his retirement in 1991.

He was a lifelong resident of the area and a 1949 graduate of Belle High School after attending the rural Indian Creek grade school.

Russell was baptized on September 21, 1947 and was a longtime member of the Pilot Knob Baptist Church where he taught Sunday School and served as a Deacon for many years. He was an active member of Belle Masonic Lodge #373 as well as the Eastern Star in Belle. Russell enjoyed bird hunting as well as deer hunting, fishing, and raising beef cattle on his farm. He was a storyteller and always had a good tale to tell. Russel was a teaser who was a master of the “Ridenhour mean look” and passed that ability on to some of his family. Above all, Russell loved the time he spent with his family and friends.

In addition to his parents and spouse of 57 years, Russell is preceded in death by infant twins, his twin brother, Roland Ridenhour, and one son-in-law, Denny Jones.

Funeral Service will be held at 10:30 a.m. on Tuesday, February 6, 2018 at the Pilot Knob Baptist Church with Bro. Doug Goodwin and Bro. Perry Wolfe officiating. Interment will follow in the church cemetery.

Expressions of sympathy may be made to the Pilot Knob Baptist Church Archery Club.

To order memorial trees or send flowers to the family in memory of Russell James Ridenhour, please visit our flower store.