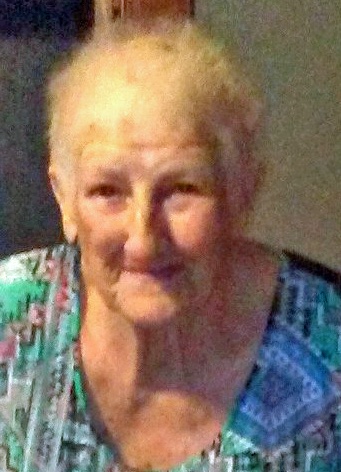 Ruby was born October 25, 1933, in Hackleburg, Alabama, a daughter to the late Jessie and Audy (Elrod) Baker.

In 1951 she was united in marriage to Harold Wright in Atlanta, Ga. Harold preceded her in death on January 9, 1975.

Ruby worked as a Nurses Aid in Hot Springs, AR and in St. Louis. She moved to the Belle area from St. Louis and had been an area resident for over 20 years. She was a member of the Pilot Knob Baptist Church where she had been baptized.

Ruby was a movie buff who loved John Wayne westerns and sci-fi movies such as Jurassic Park. She liked her t.v. shows as well and could be found watching reality shows and working on one of her puzzle books at any time during the day. Ruby liked going to yard sales and flea markets, fishing, and sitting on her front porch. She loved Elvis and her snuff but above all she loved spending time with her family.

Ruby is survived by: six children, Sarah Wright of Belle, Mario Wright and his wife Holly of Vichy, Aaron Wright and his wife Sharron of Belle, Jackie Wright of Rolla, Lula Martinez and her husband George of St. Louis, and Christopher Webb of Belle; many grandchildren, great-grandchildren, and one great-great-grandchild; two brothers, Cecil Baker and Lecil Baker, both of Winfield, Al; and a special friend, Jack Delanois, Jr. as well as many extended family members and friends.

Services for Ruby will be on Saturday, February 9, 2019 at the Pilot Knob Baptist Church beginning at 1:00 p.m. with Doug Goodwin officiating.

Expressions of sympathy may be made to the family of Ruby L. Wright.

To order memorial trees or send flowers to the family in memory of Ruby L. Wright, please visit our flower store.