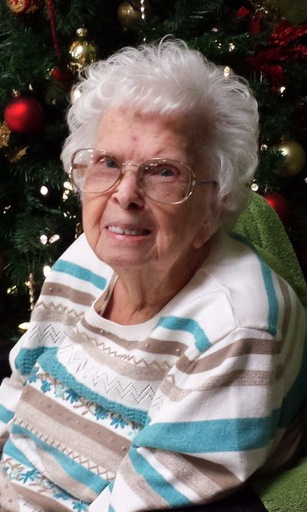 Ruby Elnora (Butler) Redden, of Belle passed away on Wednesday, July 18, 2018 at the age of 96 years, 9 months, and 23 days at the Gasconade Manor Nursing Facility in Owensville.

Ruby was born October 25, 1921 in Linn, a daughter to the late Frank and Bertha (Mantle) Butler.

On August 24, 1940, Ruby was united in marriage to Andy Redden by the Justice of the Peace in Belle, MO.  It was a double wedding as her brother, Ervin, married Faye Party. From the union of Ruby and Andy, six children were born. Andy preceded Ruby in death on February 10, 1984.

Ruby attended the Wildcat School in rural Linn as a child. She was a member of the Liberty Church of Christ and attended the Community of Christ in Belle. She was employed at the International Shoe factory in Belle for 25 years.

Ruby is survived by: four children, James Redden and wife, Pat, Audrey Gieck, and Ellen Henson, all of Belle, and Dale Banks and husband, Larry, of Springfield; son-in-law, Gordon (Pete) Gehlert, thirteen grandchildren; 31 great-grandchildren; nineteen great-great grandchildren; one sister, Betty Jean Green of Belle; one brother, Robert (Pete) Butler and wife, Juanita, of Vichy, and brother-in-law, Lee Stough of Belle, as well as many extended family members and friends.  Ruby was proud to be able to enjoy five generations of family. She loved her family very much, and will be missed greatly.

Funeral Services will be at 10:00 a.m. on Saturday, July 21, 2018 at the Church of Jesus Christ Belle Restoration Branch on Hwy EE near Belle with ministers, Shane Jarvis and Jim Jones officiating. Private family interment will be at a later date.

To order memorial trees or send flowers to the family in memory of Ruby E. Redden, please visit our flower store.