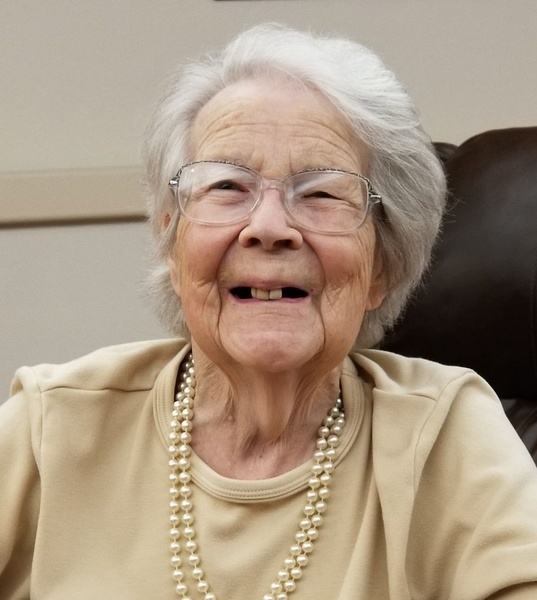 She was born April 25, 1929 to the late Boley and Winnie (Moman) Jones at Paydown. She attended one room school houses at Paydown and Dover School at Lane’s Prairie before graduating Salutatorian of the Class of 1948 at Belle High School.

Ruby was united in marriage to Boyd Jett on June 26, 1948 in Bland.  She and Boyd soon started their family and made a life on the Jones/Jett family farms raising cattle and crops.  Their interests expanded beyond the farm into local and state politics through the Maries County Democrat Committee and as primary shareholders in the Belle State Bank during the 1960s-1970s.

She was a dedicated member of First Baptist Church, Belle, where she taught Sunday School, was one of the “kitchen ladies”, helped with Bible School and the many other church events held each year. Her church family was an important part of her life.  In recent years Ruby’s health kept her from attending services but she eagerly anticipated receiving the weekly bulletin to stay in touch with the church.

Ruby enjoyed reading, cooking, especially the family’s favorites, working in her garden and with her flowers, canning and freezing her vegetables, feeding and checking cows, traveling on bus trips, volunteering at the Vienna Senior Center, playing pinochle, following local and world political news and BINGO!  She always placed her family first and her children and grandchildren were her greatest enjoyment.

She is survived by children, Steve Jett of St. James, Gloria Gehlert (Mark) of Linn, daughter-in-law Lois Jett of Linn, and grandchildren Aaron Jett and Marissa Gehlert of Linn and Cameron Gehlert of Washington DC.

Visitation and funeral services will be held October 1, 2022 at the First Baptist Church in Belle with Rev. Robert Trigo officiating.

Interment will be in Johnson Cemetery at Lane’s Prairie which is the Jones family plot and a short distance from where Ruby spent her life on the farm.

To order memorial trees or send flowers to the family in memory of Ruby J. Jett, please visit our flower store.