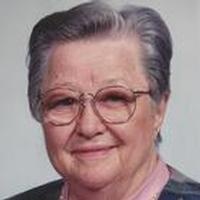 Ruby was born on August 23, 1914, in Vienna, a daughter to the late Boley and Ella (Hutchison) Elrod.

Ruby was a lifelong member of the Church of Christ. She enjoyed gardening, reading and spending time with her family. She was well known for her self taught sewing skills, which were richly demonstrated in the clothing and quilts she made and gave to her family. Ruby will be missed and remembered by all who knew and loved her.

In addition to her parents and husband of over fifty years, Ruby was preceded in death by her eight siblings, Charly, Perry, Boley Jr., Clarence and Russell Elrod, Aimee Klebba, Twin Sisters, Thelma Heck and Wilma Cassie; one grandson, Jerry Ray Schweer and her son-in-law, Edwin Schweer.

Funeral Services will be held at 11:00 a.m. on Saturday, March 1, 2014, at Sassmann's Chapel in Belle with Randy Carr officiating. Interment will follow in the Countryside Memorial Gardens Cemetery near Owensville.

Expressions of sympathy may be made to The Alzheimer's Association.

To order memorial trees or send flowers to the family in memory of Ruby E. Backues, please visit our flower store.