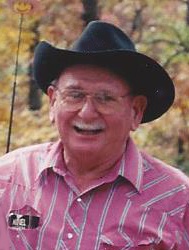 He was born July 20, 1936, the son of Roy T. Kinman, Sr. and Althie B. Kinman. He is survived by his wife of 33 years, Lois Kinman. Together they have four children, Kevin Kinman, Ronda Calkins, Richard Dillard, and David Dillard; twelve grandchildren; and twenty one and a half great-grandchildren as well as many extended family members and friends.

He was a member of the Owensville Church of Christ.

He was retired from MacDonnell Douglas in St. Louis after 36 years.

Roy loved the farm that he and his wife, Lois, lived on for 32 years where he hunted deer and he had several mounts on his wall.

There will not be a funeral service as Roy had requested that his body be donated to science. However, a memorial service for “Tex” will be held on June 8, 2019 at the Church of Christ in Owensville from 11:00 p.m. until 3:00 p.m.

To order memorial trees or send flowers to the family in memory of Roy Terrill "Tex" Kinman, Jr., please visit our flower store.