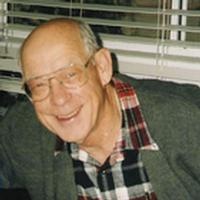 Roscoe E. Golden died Nov. 3, 2015, at home in Green Valley, AZ . He was born Oct. 4, 1928, to Ranie and Mabel Norfleet Golden, in Eugene, Mo. He served in the U.S. Army as WW2 concluded and attended Chillicothe Business College. He enjoyed a long career with the Rock Island Railroad as agent/telegrapher in Missouri and Kansas.

He married Gladys Withouse on Dec 22, 1951, and she preceded him in death on Feb 26, 2011. They moved from McPherson, Ks, to Green Valley, AZ, in 1998. Roscoe was a long standing member of the Scottish Rite, the Eastern Star, the Masonic Lodge and the Shrine.

In addition to Gladys, he was preceded in death by his parents, his step mother, Viola Golden, and 3 brothers (Harold Cecil, Buddie and Bobbie), 1 infant sister, and son-in-law, Ted Dielman. He is survived by one daughter, Debra Dielman, and one son, James Golden, all of Green Valley, grandsons, Christopher Dielman, Green Valley, and Steven Dielman (Sheila), one great grandson, Max Dielman, all of Ft Collins, CO, one brother, John (Jeanette) Golden, Decatur, IL, and a host of other family members.

Visitation will be held at Sassmann's Funeral Home in Bland from 10 am- 12 noon with Masonic ceremony, followed by a light lunch. Funeral service will be held at 130 pm, followed by burial of cremains at Liberty Cemetery near Belle, with military honors. Suggested memorials are the Shriners Hospitals for Children or your local food bank.

To order memorial trees or send flowers to the family in memory of Roscoe E. Golden, please visit our flower store.