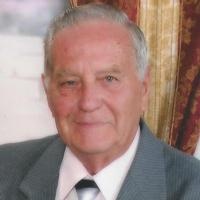 Ronald Lee Keling, age 82, of Belle passed away Wednesday, December 7, 2016 at his residence.

Ron was born May 13, 1934 in Halls, MO, a son to the late Alva Leslie and Martha Margaret (McKinney) Keling.

He was a 1952 graduate of Rushville High School and a member of the Belle area for 11 years.

In April 10, 1982 he was united in marriage to Erma Inman in St. Clair. She survives of their home in Belle.

Ron began working at the railroad when he was 16 before breaking his back and spending 6 months in a brace. After healing, Ron had a stint playing baseball for both the Cardinal and Giants minor league teams. He pitched 3 no hitters in his time there and, although he loved the game, quit baseball to work and raise his family. He had been employed at many places including Boeing, Rockwell Manufacturing, and McDonnell Douglas where he was in Production Control. Ron had been employed at Esselte Pendaflex in Union before retiring.

He was member of the Duly Baptist Church in St. Clair.

Ron enjoyed bowling and had one 300 game. His other hobbies included crossword puzzles, fishing, gardening, and just being outside. He was a St. Louis Cardinal fan and loved watching all the games, as well as watching Sunday football with his family. Ron had 4 dogs who were his babies. Samantha, Rosie, Bella, and Lola. He loved spending time with them and his family and will be missed greatly by all.

Visitation for Ron will be from 10:00 a.m. until 12:00 p.m. on Friday, December 9, 2016 at Sassmann’s Chapel in Belle. Funeral Services will follow at 12:00 p.m. with Bro. Bill Perkins officiating. Interment will be in Countryside Memorial Gardens near Bland.

Expressions of sympathy may be made to the Duly Baptist Church.

To order memorial trees or send flowers to the family in memory of Ron Keling, please visit our flower store.