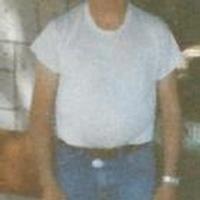 Robert Lee Rogers, age 77, of Owensville, formerly of Belle, passed away October 10, 2013 at Frene Valley Healthcare South in Owensville where he made his home since July 21, 2010.

Robert was born on November 20, 1935, in Belle, to Charles James and Gladys (Southard) Rogers. He is survived by one brother, Harry Rogers of Owensville; one sister, Ruby Rogers Martin of near Cape Girardeau, Mo. and several cousins, nieces, nephews, and special friends, Gerald and Carlotta Abel and Jerod.

Robert is preceded in death by his parents, Charles and Gladys Rogers; one brother, Charles Rogers II; one aunt, Francis and her husband of Oregon State; a niece, LeAnne Martin and his grandmother Mateldia Perkins. Robert lived and lovingly cared for his blind grandmother, Mateldia, for 23 years until her death.

Robert was a very generous and caring person. He loved to take rides around the country and marveled at how much things had changed in his lifetime. Robert loved his Lord and his church family. He liked discussing with friends what the Bible meant to him. He made his profession of faith and was baptized at the Faith Baptist Church on November 25, 2007. He attended church every Sunday, when possible.

Private family services are being held.

To order memorial trees or send flowers to the family in memory of Robert Lee Rogers, please visit our flower store.