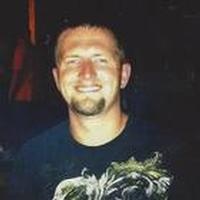 Robbie Marquart, age 31, of Bland, passed away, Saturday, March 15, 2014, at the Mercy Hospital in Washington, Missouri.

Robbie was a self-employed roofer in the area and a lifelong resident. He was a fun loving, free spirited man who lived life to the fullest every day. He loved his music, both rock and country, fishing and most of all playing pool. He was known to be very good at it and had entered different tournaments through the years. Robbie had many friends and loved spending time with them as well as his own family. He will be missed greatly by those that knew and loved him.

In addition to his mother, Robbie was preceded in death by: his paternal grandparents, Leander and Shirley Marquart and his maternal grandfather, Edward Eugene Shockley.

In lieu of flowers, the family has requested that expressions of sympathy be made to the family of Robbie or to the American Thoracic Society.

To order memorial trees or send flowers to the family in memory of Robbie T. Marquart, please visit our flower store.