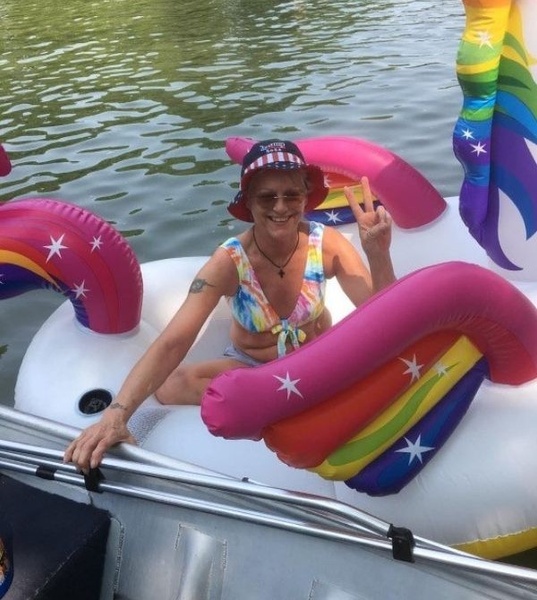 Regina Jewell (Glenn) Vaughn, age 61, of Bland passed away Friday, September 24, 2021 at her home with her husband Mark and their dog Phoenix.

Regina was born October 30, 1959, in Rolla Missouri, a daughter of Marge Crossley and the late Jewel “Babe” Calvin Glenn.

On February 29, 1996, Regina was united in marriage to Mark Vaughn. Regina attended Belle High School with the class of 1978. Following high school, she went into the nursing field.

Regina is proceeded in death by: her father, Jewel “Babe” Calvin Glenn; her brother, Carl Glenn and his wife Rosalind; and her mother in law Dolores Cook.

Regina worked 25 years as a nurse, working her way from a CNA, to an activities director, then she became a med tech. She retired from Cotton Belle and was employed at Big Mama’s Online Auction.
Regina enjoyed crafting, music, and anything tie dye. She was an amazing cook and enjoyed holding family dinners. She was known for her crazy fashion accessories. Regina always let others know how she felt and she was never afraid of anything. She was capable of making anyone smile and her laugh was contagious. Everyone can agree that she is one of the last true hippies from the 70’s.

A memorial service for Regina will be held on Thursday, September 30, 2021 at the Faith Baptist Church in Belle beginning at 4:00 p.m. Visitation will follow until 7:00 p.m.

To order memorial trees or send flowers to the family in memory of Regina J. Vaughn, please visit our flower store.