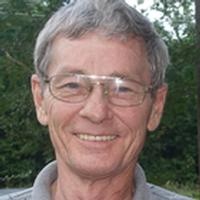 Raland was born on January 1, 1958, in Los Angeles, CA, a son to Jerry and Bennie (Wilmot) Baker. Both survive of their home in Belle, Missouri. He received the gift of Holy Baptism and became a child of God on April 28, 1963 at Our Lady of the Assumption Catholic Church in San Bernardino, California. On March 3, 2003 he was confirmed at Trinity Lutheran Church, Columbia,MO.

He was a 1976 graduate of Carl Junction High School and went on to graduate from Moberly Community College.

Raland was a member of the Good Shepherd Lutheran Church in Baton Rouge, LA. and was a HVAC Technician in the area before retiring.
Raland had a quick sense of humor and enjoyed comedy, telling jokes, and playing good-natured pranks. During his entire life, he had a love of animals and enjoyed training his dogs. Other hobbies and interests included fishing, art, refinishing antique furniture, cooking and baking. Raland could fix or build anything and always looked for a way to make things work. When others needed help, he was quick to offer and often would not take payment for the work. He always gave more than he received. Raland had a big smile and was generous with his time and talent. He will be missed greatly by those that knew and loved him.

In addition to his parents, Raland is survived by: his children, Christopher Baker of Columbia, MO, Rebecca Baker of Baton Rouge, LA, and Felicia Ramirez of Beatrice, NE; brothers, Jerry Baker, Jr and his wife Elizabeth of Linn, MO and Edward Baker and his wife Kathy of Baton Rouge, LA; sisters, Melody Musser and her husband David of Belle, Mo and Gina Meyerhardt of Springfield, MO; and four grandchildren as well as many nieces, nephews, extended family members and friends.

Expressions of sympathy may be made to the Good Shepherd Lutheran Church, 5990 Perkins Road, Baton Rouge, LA or to the Women's and Children's Hospital in Columbia, MO.

To order memorial trees or send flowers to the family in memory of Raland Alan Baker, please visit our flower store.