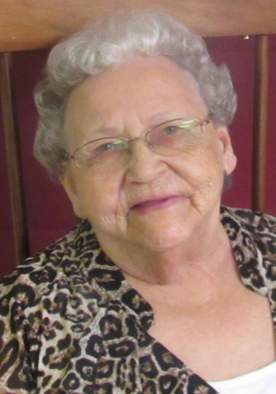 Pearl Verlee Tyree, age 83, of Owensville and formerly of Belle, passed away Sunday, March 1, 2020 at the New Haven Care Center.

Pearl was born August 28, 1936 in Belle, a daughter to the late James Henry and Hilah May (Birdsong) Mitchell.

She attended the Belle School system and had been employed at the International Shoe factory in Owensville as well as the Hazel factory in Washington.

Pearls hobbies included crocheting and going to garage sales however, her greatest joy was being a homemaker and a mother. Her home was known as a safe haven to many and her door was always open to anyone needing a hand. She was known as “Mother” to many people throughout the years. Pearl was a great cook, a little bit sassy, and a straight shooter with her words. She never believed in mincing her words. Pearl loved attending as many of her grandchildren’s activities as she could and she will be missed tremendously by her family and friends.

A celebration of Pearls life will be held at a later date.

Expressions of sympathy may be made to the New Haven Care Center.

To order memorial trees or send flowers to the family in memory of Pearl Verlee Tyree, please visit our flower store.