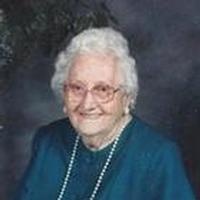 On August 10, 1935, Opal was united in marriage to Henry Fred Jannick, Jr. who preceded her in death and to this union two children were born.

Opal accepted Christ as her Savior in her youth. She spent her entire life in the Bland community and was a member of the Bland Christian Church. Opal worked for International Shoe Company and Brown Shoe Company for several years and also was a cook at the Gasconade County RIII School in Bland for 10 years.

Opal will be sadly missed by family, friends, and all who knew her.

Proceeding Opal in death are her parents and one son, Leon Keith Jannick; a brother, Cecil Thompson; two sisters, Wilma Jannick and Myrtle Wilson; one infant sister, Bernice and one brother, Chesley who died at the age of four.

Funeral Services will be held at 10:00 a.m. on Saturday, November 16, 2013, at the Bland Christian Church with Pastor Bruce Elmore officiating. Interment will follow in the Francis Cemetery near Belle.

Expressions of sympathy may be made to the Bland Christian Church Building Fund.

To order memorial trees or send flowers to the family in memory of Opal Talitha Jannick, please visit our flower store.