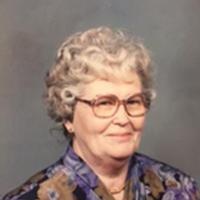 Rose was born on February 23, 1924, in Bland, a daughter to the late Samuel and Minnie (Stockton) Thomas.

She attended school in Bland and on August 2, 1941 she was united in marriage to Eugene Rogers in Bland. He preceded her in death on April 26, 1986

Rose was a lifelong member of the area and had been employed at the International Shoe Factory for several years. She was a member of the First Baptist Church in Bland.

Rose taught Sunday school for many years and was active in her church. She loved growing flowers, sewing, and reading. Rose also enjoyed visiting with friends and spending time with her family. She will be missed by those that knew and loved her.

Rose is survived by: four children, Roland Rogers of Jefferson City, Cindy Bain and her husband John of Potosi, Frances Slinkman and her husband R.K. of Belle, and Gene Rogers and his wife Vera of Bland; ten grandchildren; several great and great-great grandchildren; and a daughter-in-law, Barbara Rogers as well as many extended family members and friends.

Expressions of sympathy may be made to the Old Bland Cemetery fund.

To order memorial trees or send flowers to the family in memory of Ollie Rose Rogers, please visit our flower store.