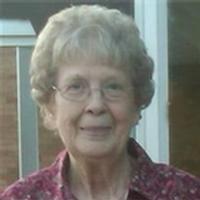 Norma June Vandegriffe, 81, of Holts Summit, passed away at SSM Health St.Mary's Hospital on Monday, August 15, 2016. She was born on February 12, 1935 to the late Vanis and Sarah Josephine (Crider) Baker. She was united in marriage on August 11, 1951 to Billy R. Vandegriffe. He preceded her in death on January 23, 2014. They were married for sixty two years.

Norma attended Belle Public Schools. She retired from Chesebrough Ponds after twenty plus years of service. She also worked as a waitress at the original Oscar's Steak House in Jefferson City. Norma and her husband, Billy, were members of Woodcrest Chapel in Columbia, enjoyed camping, trips in their RV and were members of the Gold Wing Motorcycle Club. Most recently she enjoyed playing cards, Spinner, and visiting with friends and family, especially the grandchildren and great-grandchildren.

To order memorial trees or send flowers to the family in memory of Norma June Vandegriffe, please visit our flower store.