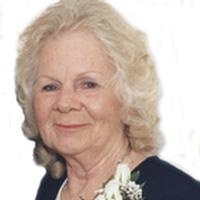 Nina F. Tynes, age 76, of Union, formally of Belle, passed away Saturday, January 17, 2015, at her residence in Union, MO surrounded by her family.

Nina was a 1956 graduate from Belle High School.

On June 5, 1965, she was united in marriage to John L. Tynes in Belle, MO. John survives at their home in Union.

John and Nina moved from Belle to the Franklin County area in 1968. They loved to travel and camp together and eventually became members at the Lost Valley Resort near Owensville. Nina was a house wife who raised three daughters. She was of Baptist faith and loved to read her Bible and spiritual books. She also enjoyed painting ceramics, embroidering, sewing, cooking, and loved her dogs and cats. Her greatest love, however, was spending time with her grandchildren and great-grandchildren.

In addition to her husband of almost 50 years, Nina is survived and will be lovingly missed by: two daughters, Joyce Rehna Britton and her husband Charles "Butch" Britton of Belle and Larisa Dawn Tynes of Leslie; one sister, Neva F. Collins of North Carolina; four grandchildren, Sabrina Shaul, Angela Doss, Stephanie Ornelas and John Turvin; and seven great-grandchildren, as well as many extended family members and friends.

Nina is preceded in death by her parents, Roy and Effie Guinn; one daughter, Delena Starr Scholler; one brother, Leroy Guinn; and two sisters, Nola McDaniel and Nora Wallace.

Visitation will be held from 11:00 a.m. to 12:00 p.m. on Tuesday, January 20, 2015, at Sassmann's Chapel in Belle. Funeral Services will follow at 12:00 p.m. with Jody Jackson officiating. Interment will be at Memorial Gardens near Owensville.

Expressions of sympathy may be made to the American Lung Association.

To order memorial trees or send flowers to the family in memory of Nina Fern Tynes, please visit our flower store.