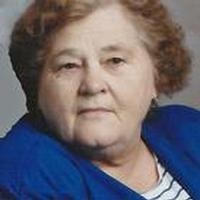 Nettie attended school in Arkansas. On December 5, 1941, Nettie was united in marriage to James Willis Doss in Monticello, AR. He preceded her in death on October 7, 2000.

Nettie was a homemaker and was of the Assembly of God faith. Her greatest joy in life was spending time with her family.

In addition to her parents and her husband of 58 years, Nettie was preceded in death by one sister, two brothers, one grandson, Sean Doss and one granddaughter, Fonda Massey.

Funeral services will be at 11:00 a.m. Friday, August 15, 2014, in Sassmann's Chapel in Bland. Interment will follow in the Old Bland Cemetery.

Expressions of sympathy may be made to the Doss family.

To order memorial trees or send flowers to the family in memory of Nettie Lee Doss, please visit our flower store.