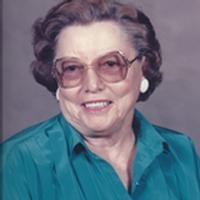 Mildred was born January 31, 1924, in Safe, Missouri, a daughter to the late Clarence and Lela (Snodgrass) Hart.

Mildred started teaching not long after graduating high school and taught for many years. She started teaching at the one room schools of Shinkle, Bloomgarden, and Summerfield. She later taught 5th grade at Belle until she retired in the spring of 1980. Mildred liked to say "she just couldn't get out of the 5th grade".

Mildred completed her Master's Degree without ever attending a regular semester. All of her college education was done during the summer or at nights. She attended Southwest Baptist University in Bolivar, Lincoln University in Jefferson City, Missouri S&T (formerly UMR) in Rolla, and the University of Missouri in Columbia.

Mildred will always be known for her great sense of humor and her love of old gospel music. She will be greatly missed.

In addition to her parents and her spouses, she was preceded in death by: a sister and brother-in-law, Irma and Dale Harrison and a brother and sister-in-law, Leroy and Margaret Hart.

Funeral Services will be held at 11:00 a.m. on Monday, February 23, 2015, at Pilot Knob Baptist Church near Belle. Interment will follow at Schanning Cemetery near Belle.

Expressions of sympathy may be made to Gasconade Manor Residents Activity Fund.

To order memorial trees or send flowers to the family in memory of Mildred L. Nie Hayden, please visit our flower store.