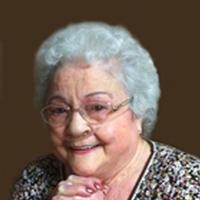 Mette was born on June 26, 1929, in Maries County, a daughter to the late Iver Chris and Hulda Catherine (Spurgeon) Skouby.

Mette attended the Belle School system. On October 27, 1946, she was united in marriage to Bert Thomas Sarchette at the High Gate Baptist Church. He preceded her in death on February 24, 2009.

She was a member of the High Gate Baptist Church.

Along with being a homemaker, Mette and Bert ran the R.C.F. 1 Boarding Home for the elderly in Belle for 15 years. She enjoyed taking care of the elderly as well as her family. Her other hobbies included crocheting and sewing.

In addition to her parents and her spouse of 63 years, she was preceded in death by: two sons, Kevin and infant son Keith Sarchette; two brothers, Donald and Chris Skouby; three brother-in-law's Lawrence Dahl, Harry Potts, and John Welsh as well as two sister-in-laws, Myrtle and Carman Skouby.

Graveside Services will be held at 2:00 p.m. on Sunday, February 22, 2015, at the High Gate Baptist Cemetery with Pastor Shane Jarvis officiating.

Expressions of sympathy may be made to the High Gate Baptist Church.

To order memorial trees or send flowers to the family in memory of Mette F. Sarchette, please visit our flower store.