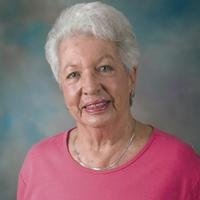 Meredith Martin Weedin peacefully passed away on December 25th, early Christmas morning, 2016. She lived for 91 years and enjoyed every moment she was here. Meredith was born in Carlsbad, New Mexico on March 10, 1925 to Irvin and Gertrude Runyan Martin. She attended Stephens College in Columbia, Missouri where she met Dr. James Britton Weedin. They were married in 1946 and began their life together in St. Joseph, Missouri. They had two daughters, Pamela Weedin Sturdy and Meredith Bonnie Weedin Duggar. After the Korean War they moved to Joplin, Missouri where they raised their family. Meredith was an active member of the First Presbyterian Church and other civic organizations,

Meredith was preceded in death by her husband, Jim and her daughter, Bonnie. She is survived by Pamela and husband Hollis W. Sturdy, granddaughter Sydnee Sturdy Dorighi and husband Matthew, great grandchildren Brennen, Carter, and Molly Dorighi. She is also survived by granddaughter Meredith Mead Duggar, grandson Waverly Alexander Duggar and wife Libbey, and great granddaughter Emily Duggar, as well as her son in law Waverly Alvin Duggar. Meredith is also survived by her sister Mary Catherine McGonagil. Her brother Irvin Richard Martin preceded her in death.

Meredith's love of her New Mexico family and heritage have been a strong influence throughout her life. Jim and Meredith spent their retirement years in Tucson, Arizona until moving back to Missouri with Pam and Hollis on their farm for the past 10 years. She enjoyed her active participation in PEO which supports the higher education of women at Cotty College in Nevada, Missouri. She was a member of the Methodist Church in Belle, Missouri.

She will be missed by so many family and friends with whom she made such a special effort to keep in touch. Interment will be in Joplin at an undetermined time. Meredith's final resting place will be in Ozark Memorial Park Cemetery in Joplin, Missouri. In Lieu of flowers, memorial contributions can be made to PEO Chapter KU and sent attention to Carla Brookshire President, PEO Chapter KU, 14309 County Road 4080, Rolla, Missouri 65401.

To order memorial trees or send flowers to the family in memory of Meredith Martin Weedin, please visit our flower store.