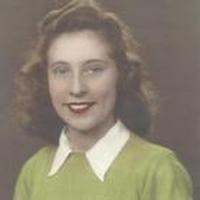 Mary Williams, age 91, of Bland, passed away peacefully, Thursday, May 15, 2014, at her residence after a long illness.

Mary attended school at McKinley High School in St. Louis and proudly graduated in 1939. On December 15, 1943 Mary was united in marriage to Albert Harrison Williams in McAlester, Ok. He preceded her in death on April 4th, 1972. Mary never remarried and remained devoted to her husband until her death. .

Mary and Albert moved to the Bland area in June of 1958. Together they raised a family of six on the family farm. Mary was a homemaker and an avid St. Louis Cardinal fan. Even as a child she would listen to the games on the radio writing play by play descriptions for her father while he worked. Her favorite player was Joe Medwick. She also enjoyed traveling when she got the chance, reading, and watching Jeopardy in her later years. As a animal lover, she always had many pets around the farm. Her greatest joy in life was time spent around her children, grandchildren and great-grandchildren. Mary, also known as Nana by the grandchildren and great-grandchildren, will be missed and remembered by all who knew and loved her.


In addition to her parents and husband of 29 years, Mary was preceded in death by one daughter-in-law, Darlene Jane Williams.

Visitation will be held from 11:00 a.m. to 1:00 p.m. on Saturday, May 17, 2014, at Sassmann's Chapel in Bland. Funeral services will follow at 1:00 p.m. with Steve Cable officiating. Interment will be held at the Oak Forest Cemetery near Bland.

In lieu of flowers, expressions of sympathy may be made to the family in care of Karen Miller.

To order memorial trees or send flowers to the family in memory of Mary Williams, please visit our flower store.