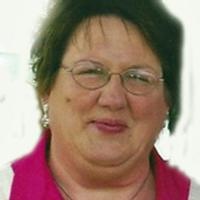 Marsha was born on November 11, 1960, in Jefferson City, a daughter to Carl A. and the late Bertha E. (Rustemeyer) Rhoads.

Marsha was a 1979 graduate of Linn High School.

On May 30, 2010, Marsha was united in marriage in Belle, to Leroy Edwin Bush, who survives at their home.

Marsha was a member of Little Flock Church where she enjoyed helping with the youth and other church actives. She most recently attended the First Christian Church in Belle.

Marsha's greatest joy was spending time with her family and friends. She enjoyed going to toy shows with her father, going to ballgames, or trying to find the best buy at area rummage sales. Marsha enjoyed making blankets, crocheting, working on crossword puzzles, reading Stephen King books, watching horror movies, working in her flower and vegetable gardens, camping, and spending time with her cats. Marsha was a great cook. She enjoyed making her homemade pizza, chili, or her marshmallow fluff.

In addition to her husband of 5 years, Marsha is survived by: two stepchildren, Becky Bush of Steelville and Quincy Bush of Belle; two sisters, Carla Sue Reinkemeyer and her husband Gary of Linn and Tamara Rhoads Cigliana of Linn; two brothers, Steve Rhoads and his wife Leanne of Holts Summit and Tom Rhoads and his wife Christa of Linn; two aunts on her mother side; nieces, nephews, two great nieces and one great nephew along with extended family and friends.

Funeral Service will be held on Thursday, February 25, 2016, at 10:00 a.m. at the First Christian Church of Belle with Pastor Mitchell Seaton officiating. Interment will follow in the Countryside Memorial Gardens near Bland.

In Lieu of Flowers, expressions of sympathy may be made to the Yayas of Belle or Shiloh Christian Children's Ranch, P.O. Box 606, Shelbina, Mo. 63468

To order memorial trees or send flowers to the family in memory of Marsha Ann Bush, please visit our flower store.