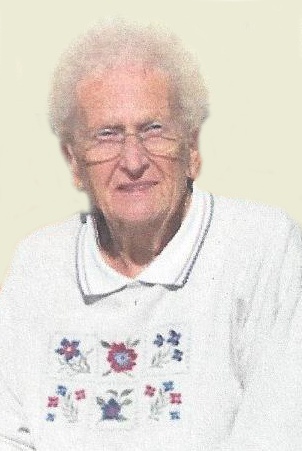 Marie A. Helmig, age 94 passed away on December 11, 2019 at Victorian Place in Owensville with her family at her side.

Marie was born on October 12, 1925 in Washington, MO a daughter to the late Arthur and Rose (Schroeder) Begemann.

In 1942 Marie was united in marriage to Victor Drewell. Victor was killed in the line of duty during WWII in Cherbourg, France. In 1947 she married Stanton Easter and later divorced. In 1961, Marie married for the last time to Huston Helmig. Huston preceded her in death on July 20, 2014.

Marie was a kind and giving person and a great cook. She enjoyed gardening, quilting, crocheting, bird watching, and visiting the boats in Boonville. Marie loved to attend family gatherings where she could visit with her family. She was active in her church and belonged to the women’s guild. Her greatest joy came from spending time with her family and especially her grandchildren, great-grandchildren, and great-great-grandchildren. She will be missed tremendously by her family and friends.

In addition to her husband and parents, Marie is preceded in death by, two granddaughters, Christine Schultz and Florence Groene, one step daughter,  Judy (Helmig) Pratt, one step-granddaughter, Michelle Meyer, one grandson, Jamie Farnsworth, one brother, Harold ‘Butch” Begemann and one son-in law, Rudy Meyer.

Visitation for Marie will be from 9:00 a.m. until 10:00 a.m. at Sassmann’s Chapel in Bland on December 21, 2019. Memorial services will follow at 10:00 a.m. with Rev. Van Lahmeyer officiating. An additional visitation will be held in the afternoon from 2:00 p.m. until 3:00 p.m. at St. Johns U.C.C Mantel Church in Union. Memorial services will follow at 3:00 p.m. with Rev. Van Lahmeyer officiating. Interment will be in the church cemetery.

To order memorial trees or send flowers to the family in memory of Marie A. Helmig, please visit our flower store.