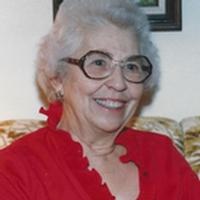 Loy M. Johnson, age 101, of Bland, passed away Thursday, May 7, 2015 at the Gasconade Manor Nursing Facility in Owensville.

Loy was born on August 4, 1913, in Highgate, a daughter to the late Joseph and Mae (Cooper) Satterfield.

She attended school at Highgate and was a member of the First Baptist Church of Owensville.

Loy was employed at the International Shoe Factory in Bland for many years and also worked at the Baptist Children's Home in Bridgeton, Missouri for some time.

She was a former member of the Eastern Star and a tremendous cook. Loy loved to read, often finishing more than a book a week. She was adventurous, even into her later years, and always took good care of herself. She loved spending time with her family and friends. Loy will be missed by all those that knew and loved her.

In addition to her parents and husband, Loy was preceded in death by: six brothers and sisters, Lola Neal, Ellis Satterfield, Ted Satterfield, Arva Vanhorn, Carl Satterfield and Hazel Brown.

Visitation will be held from 9:00 a.m. until 11:00 a.m. on Monday, May 11, 2015, at Sassmann's Chapel in Bland. Funeral Services will follow at 11:00 a.m. with Pastor Dean Catlett officiating. Interment will be at the Highgate Baptist Cemetery.

To order memorial trees or send flowers to the family in memory of Loy Mildred Johnson, please visit our flower store.