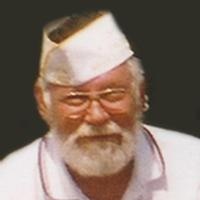 Lee was born on February 12, 1933, in Summerfield, a son to the late Leonard and Aretta (Johnson) Seymour.

He attended school in Belle and later proudly served his country in the United States Air Force.

Lee was a member of Masonic Lodge #531 in Vichy and V.F.W. Post #3410 in Belle. He was very active in the V.F.W., serving as the post commander for many years and as a three time district commander. He was a St. Louis Cardinal fan. Lee enjoyed cooking and going to the river.

He is survived by: children, Diane Seymour of Austin, TX, Kenneth Seymour of Richmond, TX, Michelle Vieth and her husband Troy of Eldon, Leroy Seymour, Jr. of Bowling Green; step-children, Mark Wills of Castle Rock, CO and Jennifer Frankel of Plano, TX; thirteen grandchildren; two brothers, Oral Seymour and his wife Terry of Belle and Larry Seymour and his wife Lily of Belle; one sister, Kaye Kochenberger of Grapevine, TX and his significant other for ten years, Melba Rohan of Owensville as well as many extended family members and friends.

In addition to his parents and wife, Leroy was preceded in death by one brother, Robert Seymour and three sisters, Delores Newbound, Marlene Colb, and Janet Crider. .

Expressions of sympathy may be made to the family of Leroy Seymour.

To order memorial trees or send flowers to the family in memory of Leroy "Lee" Seymour, please visit our flower store.