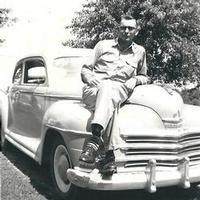 Leonard Buel Hutchison, of Kennewick, Washington, departed this life and went to be with the Lord at 4:22 p.m. October, 2, 2016, at the age of 88 years, 4 months and 19 days. He died after an extended illness at his home in Fieldstone Memory Care, Kennewick, Washington.

He was the son of Francis Tony and Georgia Ellen (Bishop) Hutchison. Leonard Buel was born in the Bend community, east of Vienna, Missouri on May 13, 1928. He attended Bend Grade School and Vienna High School, graduating in 1945.

He was united in marriage to Velma Maxine Shockley, daughter of Raymond H. Shockley and Maudie G. (Adkins) Shockley on August 14, 1948, and who preceded him in death. To this union, two children were born: Steven Lynn and Elaine Kay Hutchison.

After marriage, he was employed by International Shoe Company in Belle, Missouri for about 2 Years. In 1950, he changed employment to the fossil electrical utility industry. Starting in Wood River, Illinois, he worked for Illinois Power for 15 years and then Central Illinois Public Service for 13 years and achieved the position of Operations Supervisor. Leonard and Velma then moved to Washington State in 1978 where Leonard accepted a position as supervisor of operations in a nuclear electrical plant. After about 5 years in this position he was moved to a new nuclear electrical plant in the same Company as an Operations Engineer to assist in startup and operation of a 1100 MW unit. He retired in 1993 after completing 43 years in the fossil and nuclear electrical utility industries.

After retirement, Leonard and Velma enjoyed traveling in an RV and visiting with families and many friends back in the Midwest. In 1996 they moved back to Missouri to be near Velma’s mother, who was confined to care in Maries Manor in Vienna, Missouri. A few years after her death, they moved back to Washington State to be near their children.

Leonard Buel accepted Christ as his personal Savior during a revival at the Union Hill Baptist Church, Vienna, Missouri in October 1938 and has kept that faith which was greatly strengthened through the upbringing and teachings of his family. He was eternally grateful for his good Christian parents and the upbringing they gave him. Through his lifetime, he has maintained memberships in Bible-believing churches in areas where he and his family resided. His most recent membership was with Richland Baptist Church of Richland, Washington.

Leonard Buel was greatly loved by his family and friends. He was a good father, brother, uncle, son, neighbor and friend. All those who knew him will miss him.

To order memorial trees or send flowers to the family in memory of Leonard Buel Hutchison, please visit our flower store.