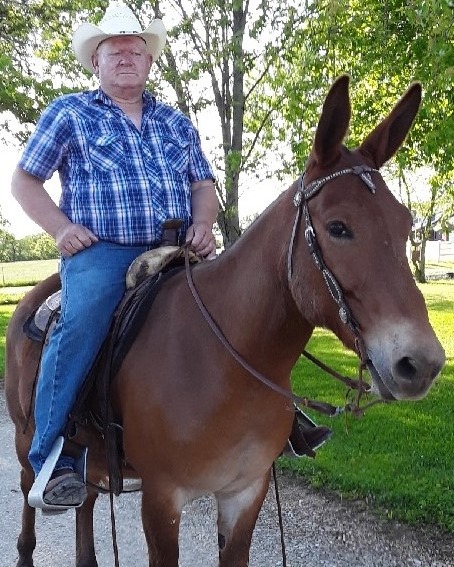 Kevin L. Becklenberg, age 68, of Belle passed away Thursday, October 20, 2022, at his residence surrounded by family.

He was born July 19, 1954, in Rolla, a son to the late Calvin and Kathern (Ridenhour) Becklenberg.

Kevin was a lifelong area resident, a 1972 graduate of Belle High School and a member of the St. Patrick Catholic Church in Rolla.

Kevin had been an over the road truckdriver for 43 years driving for Joey Butler for 22 years as well as other trucking companies. He also worked for the city of Rolla until his health declined.

Kevin was a storyteller and had many tales to tell from the road as well as other life experiences. His passions were training, driving, and riding mules and horses as well as coon hunting. Kevin was a kind and giving man and his family would say he could be as stubborn as one of his mules. He loved spending time with his family, friends, and especially his grandchildren. Kevin will be missed greatly by those that knew and loved him.

Kevin is survived by: his girlfriend of nine years, Vicki Steen; one son, Kevin (Shorty) Becklenberg, Jr of Belle; two daughters, Lisa Smith and her husband John of Gerald and Amber Fick and her boyfriend Shane Wilson of Owensville; four grandchildren, Brett and Bailee Stewart of Belle, Lexi Wilson of Owensville, and Wyatt Smith of Sullivan; and one brother, Curtis Becklenberg and his wife Cathy of St. James as well as many nieces, nephews, extended family members and friends.

Kevin was preceded in death by his parents, Calvin and Kathern Becklenberg, and his grandparents John and Beulah Becklenberg and Lloyd and Beulah Ridenhour.

Family services for Kevin will be held at a later date.

A special thanks goes out to Keith and Velda Neidert and Larry and Diane James.

To order memorial trees or send flowers to the family in memory of Kevin L. Becklenberg, please visit our flower store.