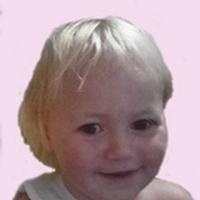 Kenyia "Kia-Bia" Rose Francis, of Licking, Missouri, passed away, Friday, April 17, 2015 at the St. Louis Children's Hospital at the age of 2.

Kenyia was born April 30, 2012, in Washington, a daughter to Crystal (Peak) Crunk and Donald Francis. Her father survives of Lebanon and her mother of Licking.

Kenyia was a happy kid from the day she was born. She was a sweet, active and independent child. Her best friend was her sister, Zoie. Together they would play games and cause as much havoc as they could, as most children do. Kenyia spent a lot of time with her older sister Rebecca and was so excited about her pregnancy that she would talk and read to the baby. All three sisters enjoyed their "Girly" days together. She loved Hello Kitty, Dora the Explorer and Peppa the Pig. Kenyia had her dolls which she called her babies and had the sweet habit of calling everyone "Honey" or "Babe". She will be greatly missed by those that knew and loved her.

She is preceded in death by one brother, Gaige Crunk and her grandmother, Cynthia Francis.

Visitation will be held from 1:00 p.m. to 3:00 p.m. on Saturday 25, 2015, at Sassmann's Chapel in Bland. Funeral services will follow at 3:00 p.m. with Pastor Bob Dodson officiating. Interment will follow at Countryside Memorial Gardens near Bland.

Expressions of sympathy may be made to the family to go towards a monument for Kenyia Rose Francis.

To order memorial trees or send flowers to the family in memory of Kenyia Rose Francis, please visit our flower store.