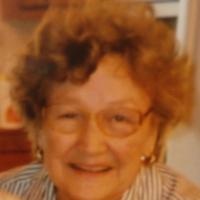 Juanita Griggs age 89, of Belle and formerly of Moberly, passed away Monday,October 31, 2016, at her residence.

She was born on January 3, 1927, in Skiatook, OK, a daughter to the late Milford and Margaret (Sullivan) Creekmore.

She was a graduate of Modesto High School in California and was raised in the Baptist faith. Juanita was a Real Estate Agent for most of her life and was also employed at the Moberly Regional Medical Center as an Admission Clerk.

Juanita had been a resident of the Belle area for 25 years and enjoyed playing golf, bowling and going out dancing with Ed. She was a wonderful cook and loved to spend time with her family and her grand-dogs, Tippy and Sadie.

She is survived by: two daughters, Marie Jones and her husband Mike of Greenville, MO, and Jean Gabbert of Moberly; eight grandchildren, nineteen great-grandchildren, and seven great-great grandchildren as well as many extended family members and friends.

In addition to her parents, husband, and longtime companion, Juanita was preceded in death by: one son-in-law, Joe Gabbert; one great-grandchild; one sister, Marie Oldman; and two brothers, Jack and P.J. Creekmore.

In lieu of flowers, expressions of sympathy may be made to the American Cancer Society.

To order memorial trees or send flowers to the family in memory of Juanita Griggs, please visit our flower store.