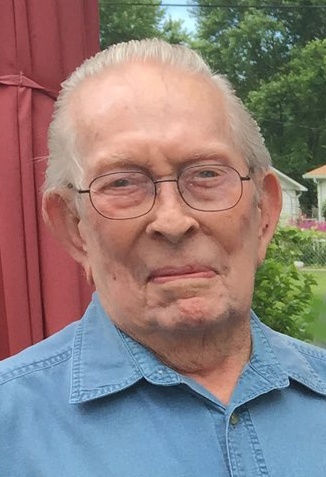 He endured blindness, hearing loss, two different cancers but the third one, he did not get the job done.

Joseph James “Jim” Plassmeyer was born in Argyle, MO, on March 21, 1932, to Alexander Plassmeyer and Georgia (Plassmeyer) Wilson. At a very early age, Jim went to live with his grandparents, James and Mary Francis Elston, and did so until he was an adult.

On April 7, 1956, Jim and Donna Rohlfing were married at the St. Alexander’s Catholic Church by Monsignor Michael Flannagan. Jim was a member of Sacred Heart Parish, Rich Fountain.

Jim graduated from Belle High School in 1952. He served his country in the Navy spending 36 months at Moffett Field, CA.

Jim was a mechanic all his life and loved his job. He worked at several Mopar dealers in the area and taught auto mechanics for 2 years at Nichols Career Center. He later worked at Scego Auto Body and Maries County R2 School’s as a bus mechanic and supervisor. Jim enjoyed most restoring two muscle cars with his son, Bryan.

Private family arrangements have been made. Interment will be at Countryside Memorial Gardens.

Donations/contributions can be made to the Plassmeyer family to be used for masses for Jim.

To order memorial trees or send flowers to the family in memory of Joseph James "Jim" Plassmeyer, please visit our flower store.
Send a Sympathy Card