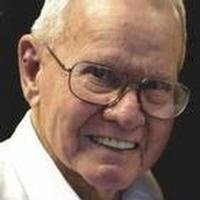 John V. Knott, age 88, of Belle, passed away Wednesday, June 11, 2014 at Mercy Hospital in Washington surrounded by his family.

John attended Vienna High School and graduated in 1945 while in the Navy. John proudly served his country during WWII for three years as an airplane mechanic for the Navy. When the Korean conflict broke out, John once again answered the call, re-enlisting in the Naval Reserves. After serving in the Navy, John met the love of his life and was united in marriage to Doris Mae Graham on May 19, 1951, in Arkansas. Together they raised two wonderful children. Doris survives her husband at the Frene Valley Nursing Home in Owensville.

John was a lifelong resident of the Belle area. He worked as a bricklayer most of his adult life and was employed at the Walter Rose Company. Later on, he was the owner and operator of the Arrowhead Sporting Goods store in Belle. John also was on the Belle School board during the 1980's, the Belle City Inspector for a time, and worked as a Conservation Agent in Pike County between 1956 and 1957.

Among John's many hobbies, he loved to fish and hunt, prairie dogs and turkey's included, collect arrowheads, and listen to older country and bluegrass. He was a square dance caller and Doris and John loved to dance. His greatest joy in life was time spent with his children and grandchild, Graci. John will be missed and remembered by all that knew and loved him.

In addition to his wife of 63 years, John is survived by one son, Greg Knott of Belle; one daughter, Trina Backues and her husband Terak of Belle; one granddaughter, Graci Lou Backues as well as many cousins, extended family members and friends.


John is preceded in death by his mother, Louise Evone Knott.

In keeping with John's wishes, his body was donated to the Pathology and Anatomical Science Department at the University of Missouri.

In lieu of flowers, expressions of sympathy may be made to the family of John V. Knott.

To order memorial trees or send flowers to the family in memory of John Valley Knott, please visit our flower store.