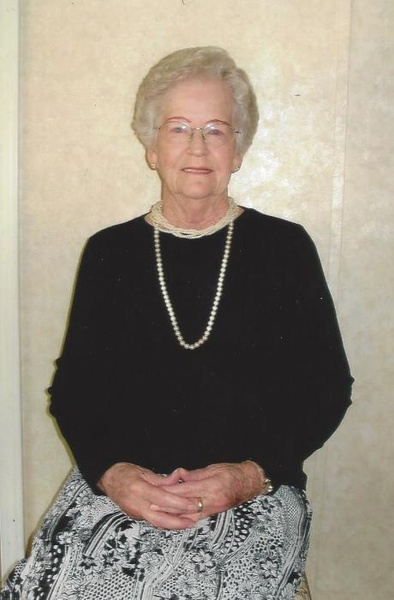 Jessie Helen Potts, of Belle passed away Wednesday, April 22, 2020 at Gasconade Manor Nursing Home in Owensville. She was 96.

Jessie was born August 17, 1923, in Belle, a daughter to the late William and Delia (Newbound) Dittman.

On August 17, 1946 Jessie was united in marriage to Floyd Potts and to this union four children were born, William (Bill), Brenda, Sam, and Pam. Jessie was raised by loving and caring Christian parents, W.H. and Delia Dittmann and grandparents, Frederick and Sophia Dittmann.

She was baptized in Dry Fork Creek in 1934 on a cold November day at the age of 11. She was a life-long member of the Liberty Church of Christ and enjoyed the time she spent with her church family.

Jessie was employed as a waitress at a Holiday Inn in Rolla from 1962 until 1985, when she retired at the age of 62. Where she was known to be a dedicated and reliable employee.

Jessie enjoyed reading her Bible each day, walking and enjoying the countryside, taking care of her grandchildren, working in her flower garden, and traveling. Jessie’s traveling expeditions took her to Europe, Canada, and all but four states in the U.S.

In addition to her parents and husband, Jessie was preceded in death by one brother, William (Bill) Dittmann, one son, William (Bill) Potts, and one daughter, Rose Marie that died at birth.

Jessie loved and was proud of her children, Bill, Brenda, Sam, and Pam. She adored her grandchildren and her great grandchildren. She was greatly interested in the lives of her grandchildren and looked forward to seeing them grow and change in the future. She never met a stranger, and everyone enjoyed her company. She was a wonderful wife, mother, and grandmother. The most important thing to her was God and her precious family and friends.

Private family arrangements have been made. A celebration of life service is planned and will be announced at a later date.

Expressions of sympathy may be made to Highgate Cemetery.

To order memorial trees or send flowers to the family in memory of Jessie Helen Potts, please visit our flower store.