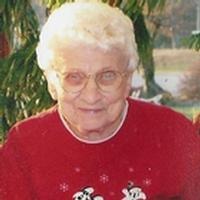 Jana Evelyn Hassler, age 91 of Belle, passed away Wednesday, April 29, 2015, at Gasconade Manor in Owensville after being in failing health for several years.

Jana was born June 2, 1923 in rural Osage County, a daughter to the late D.F. and Mary (Ridenhour) Hassler.

Jana was a graduate of Belle High School and a lifelong member of Pilot Knob Baptist Church.

Jana worked as an analyst for the Department of Employment Security in Jefferson City for several years before her retirement.

After retiring, Jana enjoyed traveling to Branson and was a St. Louis Cardinal's fan.

Jana is survived by one nephew, Jim Bacon and his wife Mary Lou; a great nephew, Andrew Bacon and his daughter Alexis and a great niece, Rebecca Fisher and her husband Russell all of Belle.

In addition to her parents, Jana was preceded in death by one sister, Bernice (Hassler) Bacon and a brother-in-law, Nelson Bacon.

Interment will be in the Pilot Knob Church Cemetery.

To order memorial trees or send flowers to the family in memory of Jana E. Hassler, please visit our flower store.