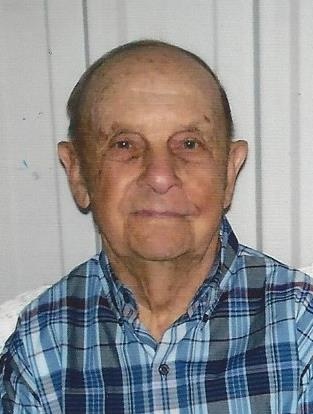 James Earl Brown, age 91, of Bland went to Heaven on Saturday, January 28, 2018 at his residence surrounded by family. Earl will be missed by his immediate family, his extended family, and his many friends.

James Earl Brown was born August 5, 1926 in Dawn, MO, near Chillicothe, to the late Robert and Beulah (Collar) Brown. Earl was the last surviving member of his family.

On May 17, 1947 Earl was united in marriage to Edna Mae Jett in St. James. Edna Survives of their home near Bland.

Earl was a lifelong and faithful member of Mt. Zion Baptist Church where he taught Sunday School and served as the Sunday School Superintendent. He was a former member of the Osage County Road Commission and served on the MFA Board of Directors.

Earl loved to tease and play jokes, going to the Gasconade River or the mountains, playing Putt Putt Golf, anything John Deere, and his Hershey’s Almond Bars and Sun drop Soda.

Earls passion was farming. He started in 1949 when he and Edna quit the Brown Shoe Company and bought the farm where they lived between Belle and Bland. He loved his dairy farm and his family and the fact that everyone could be together everyday. Earl loved to take his family on long vacations to the Colorado Mountains as often as possible. He loved to be on the go and spent his last few years riding with his son Steve and his grandson Andrew in the AAA tow truck. Earl was very proud of his entire family, and especially proud of the seventy plus years that he spent with the love of his life, Edna.

Funeral services will be at 10:30 a.m. at Mt. Zion Baptist Church on Wednesday, January 31, 2018 with Terry Hogan and Phil Rector officiating. Interment will follow in the church cemetery.

Expressions of sympathy may be made to the family of James Earl Brown.

To order memorial trees or send flowers to the family in memory of James Earl Brown, please visit our flower store.