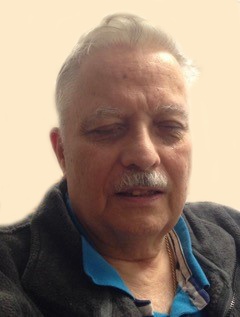 He was a 1959 graduate of Canoga High School in California. Following High School, James proudly served in the United States Army.  While stationed in Frankfort, Germany he was united in marriage to Sylvia Jane Kennedy. She preceded him in death on May 26, 2011.

Jim was a member of St. Alexanders Catholic Church in Belle and of the Knights of Columbus in Westphalia.

Jim and Sylvia lived in the Phoenix area for many years where Jim ran his own business called Vendpo Enterprises from which he retired in 1996 after twenty three years. Being blind himself, Jim was active in helping others with the same affliction. He was president of the Phoenix chapter of the National Federation of the Blind, and a member of the Leader Dogs of the Blind. Jim was also a member of the Phoenix Lions Club and the Republican National Committee. He enjoyed listening to Fox News and telling jokes but his greatest joy was spending time with his grandchildren and great-grandchildren.

James is survived by: one son, James “Jim” Boatman, Jr. and his wife Michelle of Belle; one daughter, Debbie Loomer Phoenix, AZ; eight grandchildren; thirteen great-grandchildren; and one sister, Rita Ray of Laveen, AZ as well as many extended family members and friends.

In addition to his parents and wife, James is preceded in death by two daughters, Caron Burrow and Cherie Brewer and one brother, John Boatman.

Visitation for James will be held from 9:00 a.m. until 11:00 a.m. on Saturday, October 7, 2017 at St. Alexanders Catholic Church in Belle. Mass of Christian Burial will follow at 11:00 a.m. with Fr. Wayne Boyer officiating. Interment will be in the St. Michaels Catholic Cemetery near Bland with full Military Honors.

Expressions of sympathy may be made to the Belle Lions Club.

To order memorial trees or send flowers to the family in memory of James Boatman, please visit our flower store.